Yesterday, everyone in my corner of the world was all a flutter about a massive blizzard that was set to hit our area starting at 1:00 Tuesday afternoon, and not letting up until late Wednesday night. Snow fall estimates of anywhere between eight to twelve inches (or more in some areas) were predicted, with heavy winds, gusting past 60 miles per hour. There were Warnings and Watches and mad rushes to the grocery store to stock up on canned goods.

Now, folks... We've seen much, much worse storms than this in our day. This is northern Minnesota. We live on the lake they call Gitche Gumee. We put our winter coats away when the temperature starts to average 35°. We frolic outside in the snow and the ice, and we scoff at negative temperatures.

Windchill of minus fifty? Pshaw! Just bring a sweater!

When I was in high school, we had a snowstorm on Halloween that dumped nearly 40 inches on us in two days. We trick-or-treated in our snowpants. That's just what we do.

And apparently, nowadays, we freak out when the weather people predict eight measly inches of snow at the end of March.

I hate to say, "I told you so," especially because it usually comes back to bite me in the ass. But, I told you so, people. I was so confident that there would be no "so-called blizzard," that I purposefully took a before photo so that I could take an after photo to show you all just how powerful this blizzard wasn't. 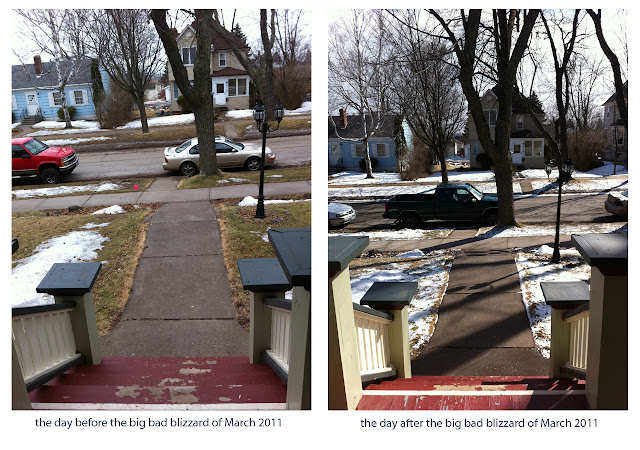 And, I'm not saying I'm disappointed that we didn't get dumped on. Quite the contrary. I'm so ready for spring. But, I just wish the weather people could get it right -- or even just close to right -- for those of us who live near the Lake.

It's worse than the Boy Who Cried Wolf. It's the meteorologist who cried blizzard.

*Please do note that the bright pink toy in the before photo has most decidedly been blown away by the March Blizzard of '11. Clearly, this was a doozy of a storm.
at 9:27 PM
Email ThisBlogThis!Share to TwitterShare to FacebookShare to Pinterest
tags: Duluth, everyday life, halloween